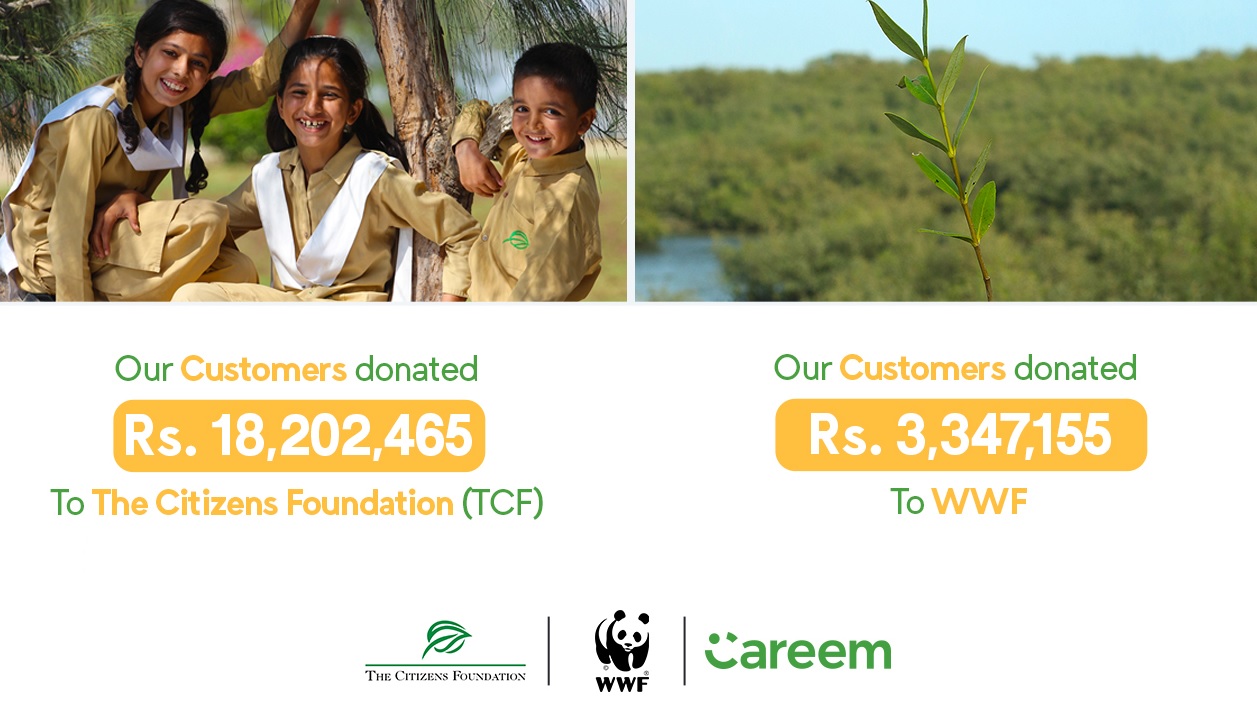 Careem, the first Super App for the greater Middle East and Pakistan has received donations worth PKR 21.5 million over the last two years through its rewards and ‘Build Pakistan’ car type. These donations were made by customers using careem Super App to two reputable charities, The Citizens Foundation (TCF) and World Wide Fund for Nature-Pakistan (WWF-Pakistan) .

The donation amount was revealed in a unique virtual ceremony where notables from both charities and Careem were present where out of the cumulative amount, TCF and WWF received PKR 18.2 million and PKR 3.3 million respectively over a period of two years.

“We are immensely happy and overwhelmed to see that our customers have donated wholeheartedly for the betterment of society. Through this innovation in our SuperApp, Careem will lead to a shift in how people think about donating to charities with an ease of clicking a button. Technology alone has the potential to act as an enabler, virtually allowing a seamless mechanism for donations.”

Mushtaq Chhapra, Co-Founder of TCF stated, “We express our gratitude to Careem and customers, for considering and echoing our values of bringing affordable and quality education for youth of Pakistan, as we believe that it’s education which makes difference at large.”

Hammad Naqi Khan, CEO of WWF-Pakistan said: “The environment needs everyone’s utmost attention. We are glad that Careem customers have played their part in acknowledging the importance of conservation towards a healthy and sustainable planet for nature and people.”

Careem Rewards are redeemable points customers earn on all rides they take or food/delivery orders they place. With the recent launch of its Super App, Careem has expanded its Rewards programs, enabling customers to redeem their points on numerous functions within the app ranging from rides, food, shopping, credits, skywards miles, partner services, and entertainment.

As part of Careem’s overall purpose and Super App strategy, it is determined to constantly innovate its services all while building its REWARDS program further by partnering with local and regional service providers as well as charity organizations.